The Yoga Guru also decoded the reason behind the name change of Ruchi Soya Industries to Patanjali Foods and revealed they would soon launch Patanjali Ayurved’s public offer. 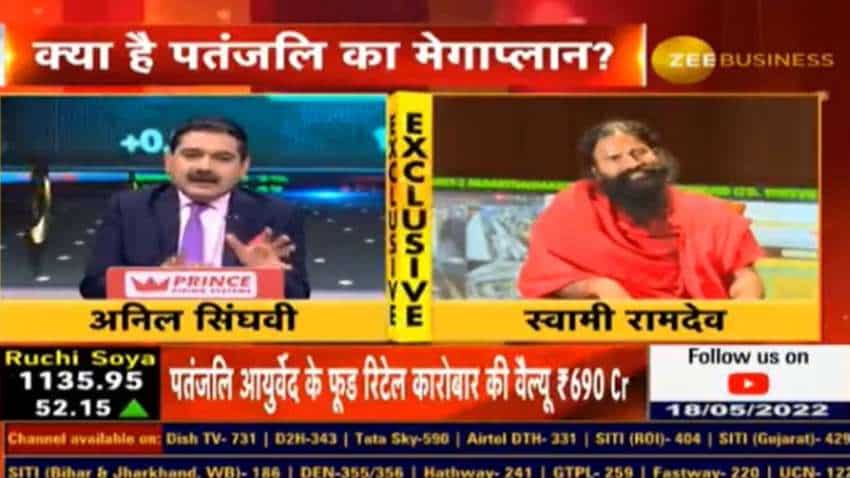 In an exclusive conversation with Zee Business Managing Editor Anil Singhvi, Patanjali Ayurveda’s founder Yoga Guru Swami Ramdev confirmed that Patanjali Ayurved, which will manage herbal cosmetics and medication business, will be a non-food company. He said that the company will also be listed on the domestic exchanges.

He said that the company will launch an initial public offer (IPO), going forward.

The Yoga Guru also decoded the reason behind the name change of Ruchi Soya Industries to Patanjali Foods and revealed they would soon launch Patanjali Ayurved’s public offer.

According to Swami Ramdev, Patanjali’s brand value is much superior to Ruchi Soya. He added that more than eight categories of the food business will be transferred to Ruchi Soya at around Rs 690 crore through a slump sale.

In the last two years, Ramdev said, “We have not only turnaround Ruchi Soya, but also doubled the overall turnover of Ruchi Soya, enhancing its profitability by 2.5-3 times.” This was mainly done on the back of good corporate governance, strong distribution, and brand value among others, he said.

Quoting as promised in DRHP/RHP paper, Ramdev further said, “We are looking for investors benefit, as promised and want to enhance our consumer and retail base, going forward.” He said this when Anil Singhvi asked for the reason behind business transfer at so low value.

He affirmed that Patanjali Ayurved, which will manage herbal cosmetics and mediation business,  will be only a non-food company and mulling to launch an initial public offer (IPO) of the same soon.

He explained, as per norms we have to dilute more 6 per cent stakes of Ruchi Soya funds mobilised through it will be used to make Patanjali Ayurved debt-free.

With two business entities in food and herbal cosmetics segment, Ramdev noted, “Patanjali will play a crucial role in Prime Minister Narendra Modi’s Atmanirbhar Bharat campaign. The company is working in the same direction and will Patanjali Foods (Ruchi Soya) to a new level.”

He said, “We are planning around Rs 5200 crore turnover and around Rs 800 crore EBITDA going forward for new entity Patanjali Foods.”

The board also approved a business transfer agreement with Patanjali Ayurved Limited to acquire the food retail business, which consists of manufacturing, packaging, labelling, and retail trading of certain food products, Ruchi Soya said in a regulatory filing on Wednesday.