The highest revenue growth forecast is by PhillipCapital (5.2 per cent) followed by Nirmal Bang (4.5 per cent) and IDBI capital (4.1 per cent). HDFC Securities and Motilal Oswal estimate revenue growth at 3.6 per cent and 3.7 percent respectively 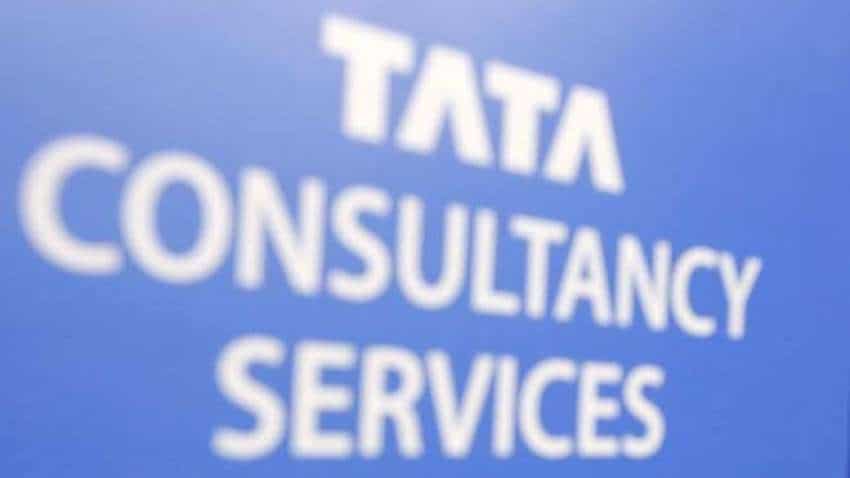 The revenue growth for TCS will be offset by currency headwinds of 60bps, at least two brokerages have maintained in their reports.

Tata Consultancy Services (TCS) will be announcing its July-September quarter results on Friday. The Indian IT bellwether is expected to post an average 4.22 per cent revenue growth in constant currency (CC), according to estimates by five brokerages.

The revenue growth for TCS will be offset by currency headwinds of 60bps, at least two brokerages have maintained in their reports.

The highest revenue growth forecast is by PhillipCapital (5.2 per cent) followed by Nirmal Bang (4.5 per cent) and IDBI capital (4.1 per cent). HDFC Securities and Motilal Oswal estimate revenue growth at 3.6 per cent and 3.7 percent respectively.

Motilal Oswal expects IT sector Tier-1 USD revenues to grow at an average 4 per cent rate for Q2FY22, with TCS remaining a laggard and behind arch rivals Infosys (4.9 per cent) and Wipro (6.3 per cent) and ahead of HCL Technologies and Tech Mahindra.

IDBI capital forecasts revenue growth for the large cap IT companies in the range of 4.1 – 7 per cent QoQ in CC terms.

TCS is expected to report a PAT growth of 16 per cent on the YoY basis, Motilal Oswal opines, which is expected to be lower than its large cap peer Tech Mahindra.

Margins are expected to be marginally up by 30bps on strong growth and lack of wage hikes and visa costs, Phillip Capital opines.

On the margin front, TCS has been indicating a higher than previously indicated pressure from the supply side, Nirmal Bang report said. “However, for 2QFY22, we think that margins will expand sequentially on operating leverage and some pricing improvement,” it added.

“We expect revenues from India and APAC regions, which were hurt by the second covid wave to make a strong comeback,” Nirmal Bang report said.

PhillipCapital tweaks its FY22/23 estimates slightly (0-5%), to incorporate Q2FY22 performance on the back of growth, driven by strong momentum in client spending and conversion of strong bookings to revenue.

TCS remains its top picks among the large cap stocks, for this brokerage firm.

IDBI capital will monitor outlook of TCS on key verticals - BFSI, Retail & CPG and manufacturing with sustenance of double-digit growth beyond FY22E. It will also watch for TCV (Total Contract Value) of deal wins, commentary on pricing, deal closures and deal pipeline and commentary on long term digital trends. Outlook on EBIT margin and its sustainability will be key in determining the guidance, it said.

The TCV needs to be closely watched as the base quarter number was very strong (US$8.6bn), Nirmal Bang said. Taking a contrarian view on the outlook, it expects growth to slow down on normal seasonality and supply constraints in 2HFY22.

“We think FY22 TCV for TCS will moderate from the 17 per cent growth seen in FY21. This should be the harbinger of revenue growth moderation in FY23 from a peak of 16.5 per cent growth that we are likely to see in US$ terms in FY22,” it said.

The performance of TCS over next quarters is expected to align with the sector performance. IDBI capital said that commentary on revenue guidance, margin outlook, hiring and attrition, outsourcing trend in Europe and digital and offshoring will be a key determinant for the sector and TCS. Though the demand outlook for all the IT companies remains robust for the current quarter and for FY22E, it said.

Slow sectoral growth at higher plateau to impact revenue acceleration for Tier-1 companies including TCS between FY22 and FY24 after a peak in FY22, this Nirmal Bang report said.

“A lot of it would depend on the order inflow in the reset of FY22 and beyond,” it further said adding “We expect moderation in FY22 compared to the very strong numbers one saw in FY21.”.

Meanwhile, PhillipCapital takes a different view opining that “we are at the cusp of unprecedented demand environment, triggered by compressed digital transformation. We continue to remain optimistic on the Indian IT space, with strong fundamentals.”.

“We expect a median growth of 5.4 per cent CC QoQ in 2QFY22 in our IT Services coverage universe. Topline performance is expected to remain strong across our coverage, led by a robust demand environment and deal wins,” it said.

IT Sector Stocks Vs Sensex, Nifty

TCS has gained 12.8 per cent in the reporting quarter while it is up almost 32 per cent on the YTD basis, versus 20.1 per cent returns by Nifty IT in Q2FY22 and 44 per cent on YTD basis, according to Nirmal Bang report.

The BSE IT index has outperformed the BSE Sensex over the last three months. While the former has gained by 14.2 per cent, the latter is up 12.7 per cent during this period, IDBI capital report says.

Meanwhile, Nifty IT index was up 20.1 per cent versus Nifty by 800bps and the Nifty Bank by 1250 bps in 2QFY22 on the back continued strong demand conditions, low interest scenario globally, worries around the largest competing sector, Financials, on credit growth and asset quality, Nirmal Bang report said. 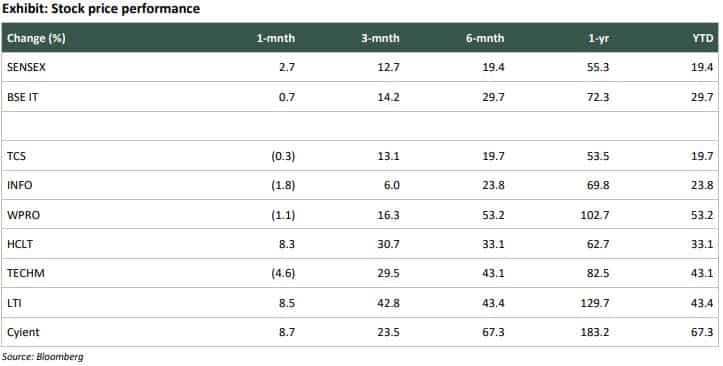 In FY21, IT services sector has had a phenomenal run and has significantly outperformed the broader index. Nifty IT is up 116 per cent as against Nifty which is up 78 per cent. “Currently, most stocks are trading at their lifetime high multiples. Large part of this is based on strong fundamentals and robust demand environment,” PhillipCapital said.

Nifty IT’s outperformance in 2QFY22 was driven by HCL Technologies (up 30 per cent) and Tech Mahindra (up 26 per cent) in Tier-1 pack.

IDBI Capital expects cross currency headwinds to dampen the reported dollar growth for IT companies in the range of 3.5 per cent on the YoY basis while 6.4 per cent on QoQ basis.

Attrition is expected to rise sequentially for TCS even though it will be industry’s best, Nirmal Bang report said adding that TCS is likely feeling the ‘Accenture’’ effect on hirin

TCS buyback offer: What should investors do—should you tender shares?