Vinod Aggarwal, MD & CEO, VE Commercial Vehicles (VECV), talk about recovery in the commercial vehicle segment, an impact that the second wave of COVID can have on it, the newly established truck plant at Bhopal, shortage of semiconductors, scrappage policy to strategy towards electric vehicles and future technology among others during a candid chat with Swati Khandelwal, Zee Business. 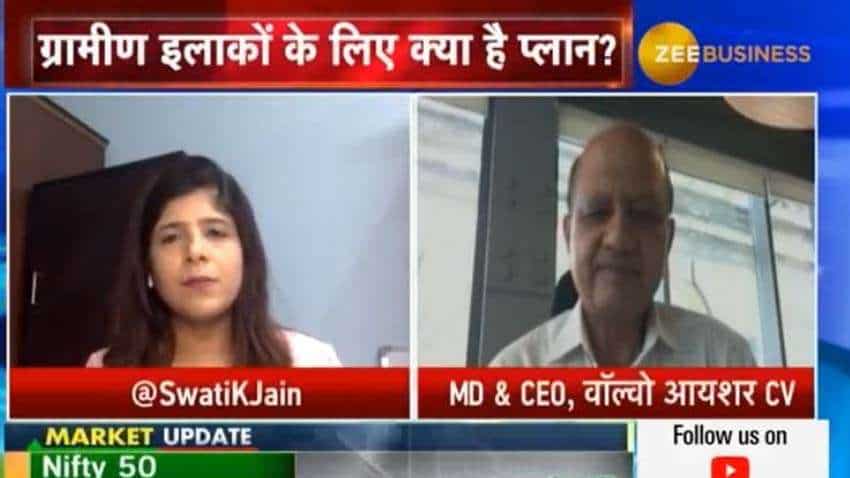 Vinod Aggarwal, MD & CEO, VE Commercial Vehicles (VECV), talk about recovery in the commercial vehicle segment, an impact that the second wave of COVID can have on it, the newly established truck plant at Bhopal, shortage of semiconductors, scrappage policy to strategy towards electric vehicles and future technology among others during a candid chat with Swati Khandelwal, Zee Business. Edited Excerpts:

A: If you have a look at the trend of the last two-three months, it seemed that the recession was about the end, especially in the truck industry, because there was good growth in the last quarter and it continued to be good in February, as well. It seems that it will remain good in March also. But certain uncertainty has arisen due to the second wave of COVID, especially in some states, like Maharashtra – it is a very important market for CV – where it is surging a lot due to which few customers, who were placing the orders have gone a bit defensive. Apart from this, overall, the CV industry is looking good because the CV industry has come out of a lot of problems after two years and a lot of things have happened that are positive. The most positive thing is that the replacement demand is going to be very strong as there has not been a replacement in the CV industry in the last two years. You have seen that BS-VI has been implemented. In BS-VI, the technology has improved, trucks have modernized, productivity has been better, and the cost of ownership has reduced and due to this replacement is more justified. We through Volvo Eicher provide 100% trucks and buses with factory-fitted telematics, which are 100% connected. So, the 100% connected trucks will improve their productivity and if there is a productivity improvement, then the customers should replace the old trucks and move on to BS-VI, which is good for them.

Apart from this, the government has a special focus on infrastructure, and it has also announced it even in the last fiscal budget. The government is likely to invest up to Rs 111 lakh crore ($1.5 trillion) on infrastructure in the next 3-5 years. Due to this, the future of construction trucks, which are tippers, is quite good. Besides, the economic sentiments are positive, and GDP is likely to grow next year. So, for this reason, I think, recession for the CV industry, especially for trucks, is ending. However, there is a problem with the buses because shoos are not fully open, yet.

Q: Recently, you started a truck plant in Bhopal. What has been the utilisation rate and what are your plans related to expansion at that plant? Also, update us about how domestic and international markets are churning out?

A: The plant set-up at Bhopal is a very modern plant and the entire process has been installed based on Industry 4.0. Due to this, the trucks that are manufactured at the plant will be best in quality and export terms, they can compete with the Japanese trucks. Also, we have a lot of capacity as we have capacities at Pithampur and Bhopal. The truck industry is going to grow in the next 2-3 years, and we are completely prepared for it. Currently, the capacity utilisation has improved a lot, as I have already said that the demand has been good since the last 3-4 months due to which our current capacity utilisation stands at 65-70%. And it seems that the utilisation will grow up in the next two years and the way industry will grow. In fact, our growth will be better than the industry. Even this year, we have increased our market share in every vertical. If you have a look at the heavy trucks, then VECV’s market share in heavy trucks has increased to 8%. Last year, it stood at 6%. In light and medium duty trucks the market share has gone up to 31% and it stood below 30%, last year. In the buses, our market share has gone up from last year’s 17% to 25%. In Volvo trucks also, our market share is quite good. So, we have done well in terms of market share and our growth has been better than the growth of the industry. Next year, as well, we will expect that our growth remains better than the growth of the industry.

Q: There was a problem related to the semiconductor shortage. Is it resolving and how are you tackling the situation?

A: It should be followed closely. We are closely monitoring it with all the suppliers and try to get as many parts as we can. So, it is a hand-to-mouth situation, and it seems that the difficulties will continue at least for the next three months.

Q: Scrappage policy has been announced and details related to it have been issued. How much incremental demand in trucks and buses do you see for your company due to this policy?

A: Scrappage policy is a good move. But there is one thing in it like we were also requesting the government to provide certain incentive from the government as well. So, in our request, we asked the government to provide some concession in GST to the places where the vehicles are scrapped. But the government had not done anything in GST yet. But whatever policy has been announced and have allocated money for buses, which is present in the last fiscal budget, will slightly improve the replacement. We were asking for a concession on GST because 10-15 years old trucks are generally run by the weaker section, they are economically very weak. And if you will ask them to replace the truck then they must have money to replace them. So, we wanted to say that they will get some money through the scrap. Secondly, you have asked the manufacturers to provide a discount and they will get money from there. Thirdly, we were saying if they are provided with some incentive by the government. Putting all these three things, they should have enough money so that they can buy a better truck, for instance, if he is operating a 15-year-old truck and have to buy an 8-year-old truck then they should have enough money for this purpose. If he can’t buy, then he will not replace the existing truck maybe you add additional taxes and penalties on it. He will pay for it as there are possibilities that he can’t buy it. We wish that they should replace it and we hope that the policy should succeed. We, the manufacturers are ready for it, will look forward to what kind of discounts can be offered from the discount the government has advised us.

Q: Tell us about the play of electric vehicles in your product development strategy? Also, tell us the way Volvo Eicher is gearing up for the future technology?

A: There are two-three things in it. Firstly, alternate fuels are becoming very popular. Alternate fuels, like CNG, and LNG is about the come in the future. So, the proliferation of CNG has increased a lot and several fuel stations have been created across the country. CNG is cheaper and is a bit clean fuel. So, the industry is migrating significantly to CNG, in fact, a huge market for 5-16 ton is converting into CNG. We are taking a lot of actions on it so that we can sell more and more CNG trucks. Apart from this, there will a huge movement on LNG in the future as well as fuel stations are being created. When it comes to electric trucks, electric busses and fuel cell technology, then actions have already started in electric buses as few buses are available in the market. Even we are ready for the electric buses and have also sold few buses in the past. But electric technology is evolving, and it will take time. Few buses are coming into the market. And in future, more buses will come in the market. Firstly, the electric technology will come in the buses only and it will be followed by small trucks, like 5-ton trucks for within city movement and for civic applications. After this, hydrogen cell or fuel cell technology is the next step. So, all the technologies will gradually come to India and actions will happen in those and the industry is working on them.

Citigroup to exit consumer banking operations in India, 12 other countries—Here is why