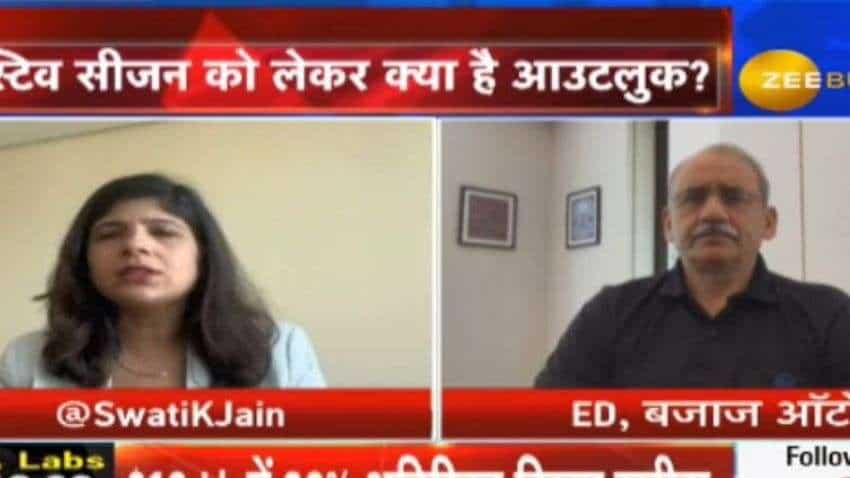 Q: How will you summarize the numbers of September month and what led to the decline in numbers?

A: Month-wise, the numbers are very good. A decline in the numbers is visible because there was a pent-up demand during the last September and took the numbers ahead. So, this is a type of base effect. But this year, the numbers have improved every month of the industry as well as the Bajaj Auto, which is a slight percentage ahead of the industry. The best way to cancel the impact of this base effect is to take April to September period under consideration to understand the industry as well as take the last three months into your consideration because if you will have a monthly wise look then there were huge ups and downs last year, which may lead a wrong conclusion. So, my conclusion is that there had been a good revival in the industry, in the motorcycle industry and there is a huge revival in the three-wheeler industry because the vaccination program has brought stability is coming mentally as well as financially which is leading to an improvement in business. So, it seems that the festive period - Navratri will start in the next few days - will remain reasonable.

Q: How big is the semiconductor issue for the industry and in particular for Bajaj Auto and how will you handle it and is it making you slow down the production process, if yes, to which level and by when the issue is likely to be resolved?

A: It is a big issue for the auto industry but the usage of semiconductors in motorcycles and three-wheelers compared to cars is quite low. But it is used in our high-end bikes, i.e., we did 4 lakh vehicles in September out of which 15-20% bikes were impacted with it. So, if you will have look awe will look at the overall 4 lakh numbers then there is a slight shortage but at an overall level, it didn't have a big impact. But this is a premium segment, where profitability is high plus customers are getting disappointed continuously in India, overseas, with Brand Bajaj and KTM, and all these brands are affected. Due to this, definitely, the business impacted 5-10% at an overall level. On month-on-month, the scenario is changing now and different reports are there and if we will have an eye on the last two to three months trend and information that the vendors are providing to us and our observation, suggest that things will remain almost the same for the next five to six months. If it improves then it is good but we should be prepared to face the next five to six months, which will be the same.

Q: Bajaj Auto arm has swapped stake in KTMAG with Pierer Mobility. Help us explain the rationale here and what does it mean for the company?

A: Earlier, we had a partnership with KTM at the level of the operating company, a company that manufactures KTM brand motorcycles. What has happened after the swap is that our partnership has become more strategic and has reached a higher level as the holding company. This means, there is more business under the company, we already had participation in the motorcycle, apart from this, they have electric and a design house, 'KISKA', so, the KISKA design house and electric bikes will officially come under the purview. We had a collaboration on the electric while talks were going on in R&D, but it was a separate unit. But by going to the holding company level, the entire business of KTM comes under the holding company and our partnership is at that level. I feel, that with this our relationship had turned more strategic and closer, which is good for both companies.

Q: Update us about the response you are getting on Chetak EV and by when we will get a chance to see full-fledged Chetak electric scooters on the road?

A: We are still getting a very strong response and our supply is running behind by one to two months to meet the response. After doing it in Maharashtra and Karnataka, we have to take a step ahead in Chennai and Hyderabad. After this, we will step into other states as well. The ear of electric transition has started and I think that it is just a start, beginning of a beginning. Less than 2% of scooters and two-wheelers are electric and surely, in the next 3-5 years, it will reach between 10-25%. A new industry is emerging and we are much attracted towards it. In fact, it is a new segment of scooters for us in India as well as overseas because we have overseas distribution, channel partners and brand but we have not been able to access the scooters markets and after being electric these markets will come under the radar of Bajaj Auto. But our aim is to increase our capacity in the next few months - six to twelve months - R&D capacity. Our management is quite strong in product development and supply chain. A time will come when you will not have a subsidy and currently, the subsidy is covering the gap between cost and price. So, how it will be covered? In it, we will have to look at the R&D and supply chain capacity. So, we are not running towards volume but are running towards capacity. Secondly, we wish to acquire the premium position in it and you will get to see that Chetak is the most priced due to its performance, design, features, styling, full steel body as it does not have a plastic body. It has been done because we want to stand at the premium position. Thirdly, we are giving more importance to sales and later to sales because it is a new category and if the customer will start facing issues in it then he will be disappointed not just with this brand but with the entire category.  This is why we wish to enhance our service capacity first and then sales at the places where we will enter. So, I feel, if these three to four things are done well in the immediate term, then we will be able to reap the benefits of this opportunity.

Galaxy Surfactants will have a Capex outlay of Rs 150-200 crore every year: U Shekhar, MD

Blue Star has applied for PLI for Component Manufacturing: B Thiagarajan, MD

Paper prices may increase by 3-5% from next month: Ashok Kumar, ED, Pudumjee Paper