India's aviation regulator has issued a show cause notice to SpiceJet Limited seeking its response on a series of malfunctioning incidents reported bit during its flight operations. 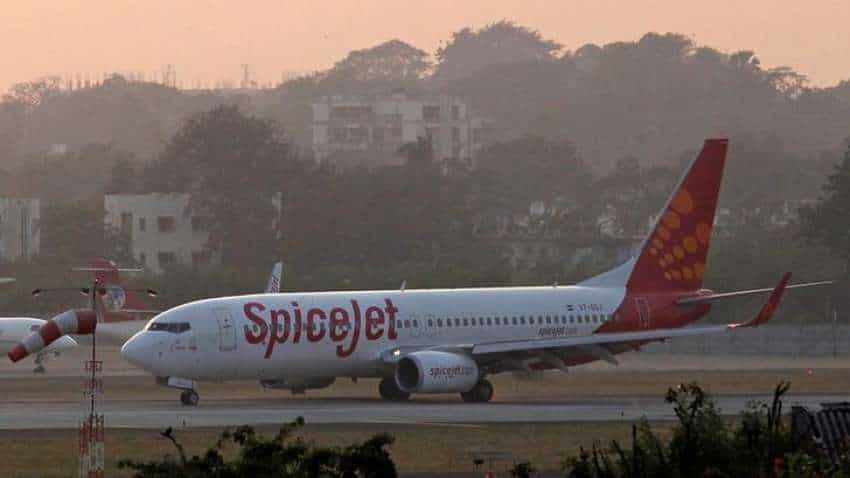 The aviation regulator has asked about the reason for poor internal safety and inadequate maintenance actions. Pic: Reuters

India's aviation regulator has issued a show cause notice to SpiceJet Limited seeking its response on a series of malfunctioning incidents reported bit during its flight operations.

In a show cause notice issued on Tuesday, the Directorate General of Civil Aviation (DGCA) has asked the Accountable Manager of SpiceJet to show cause within 3 weeks of receipt of the notice as to why action should not be taken against the airline.

SpiceJet has failed to establish safe, efficient, and reliable air services under Aircraft Rules, 1937, the show cause notice said.

The review period by the DGCA has been from 1 April 2022, where the regulator ha noted that SpiceJet on a number of occasions has either turned back to its originating station or continued landing to the destinations with degraded safety margins.

The aviation regulator has asked about the reason for poor internal safety and inadequate maintenance actions.

“SpiceJet is in receipt of the DGCA notice and will be responding within the specified time period. We are committed to ensuring a safe operation for our passengers and crew. We are an IATA-IOSA certified airline. SpiceJet successfully completed the meticulous audit program for recertification in October 2021. We have been regularly audited by DGCA. All our aircraft were audited a month ago by the regulator and found to be safe. All flights of SpiceJet are conducted in compliance with the applicable regulations of the DGCA Civil Aviation Regulations on the subject”, said SpiceJet on DGCA notice.

Passenger safety is paramount. Even the smallest error hindering safety will be thoroughly investigated & course-corrected. https://t.co/UD1dJb05wS

SpiceJet after eight malfunction incidents in the last 18 days, according to a PTI report.

Meanwhile in a financial assessment carried out by DGCA in September 2021, it has been revealed that the airline is operating on Cash & Carry and suppliers/approved vendors were not being paid on regular basis leading to a shortage of spares and frequent invoking of Manufacturing Engineering Laboratory (MEL).

SpiceJet said its freighter aircraft, which was heading to Chongqing in China, returned to Kolkata on Tuesday as the pilots realised after take-off that its weather radar was not working.

This is at least the eighth incident of technical malfunction happening on a SpiceJet aircraft in the last 18 days.

On July 5, 2022, SpiceJet Boeing 737 freighter was scheduled to operate from Kolkata to Chongqing. After take-off, the weather radar was not showing the weather. The PIC (pilot-in-command) decided to return to Kolkata. The aircraft landed safely at Kolkata," SpiceJet spokesperson told PTI on Wednesday.

On July 5 itself, the airline's Delhi-Dubai flight was diverted to Karachi due to a malfunctioning fuel indicator and its Kandla-Mumbai flight did priority landing in Maharashtra's capital city after cracks developed on its windshield mid-air.

On July 2, a SpiceJet flight heading to Jabalpur returned to Delhi after the crew members observed smoke in the cabin at around 5,000 feet altitude.

Fuselage door warnings lit up on two separate SpiceJet planes while taking off on June 24 and June 25, forcing them to abandon their journeys and return.

On June 19, an engine on the carrier's Delhi-bound aircraft carrying 185 passengers caught fire soon after the take-off from Patna airport and the plane made an emergency landing minutes later. The engine malfunctioned because of a bird hit.

In another incident on June 19, a SpiceJet flight for Jabalpur had to return to Delhi due to cabin pressurisation issues.

According to officials of the Directorate General of Civil Aviation (DGCA), the aviation regulator is investigating all the incidents.

Trouble for SpiceJet as banks put loans to airline in high-risk category: Sources

Vivo V25 Pro 5G price in India, specifications and availability - All you need to know ahead of Aug 17 launch