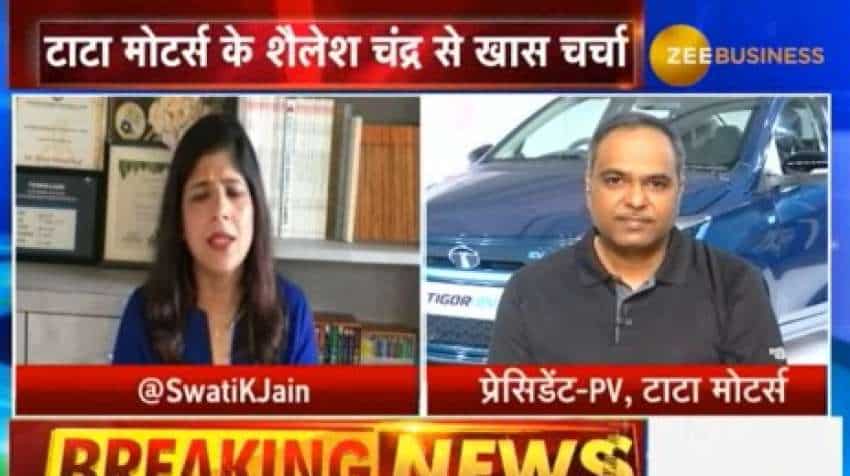 Stock market wrap: From Nifty at all-time high, FIIs, DIIs action to most buzzing sectors, what drove market this week — All you need to know

Q: The company, recently, launched Tigor EV. Tell us about the product and expectations in terms of the number of units that you can sell?

A: When it comes to Tigor EV that we have launched then if you remember Nexon – based on our state-of-the-art Ziptron Technology – then it has gained a lot of popularity in one-and-a-half years after being launched. Based on the same technology, we have launched the Tigor EV today and its price range starts from Rs 11.99 lakhs, and the top-end model is available at Rs 12.99 lakhs. It will have an extended ARAI-certified driving range of 306 kilometres. It is quite a zippy car that reaches from zero to 60 km/hour in just 5.7 seconds. We are offering a warranty of eight years and 1.60 lakh kilometres, and it has a 26-kWh battery pack, and it delivers a peak power output generation of 75 PS from the motor provided in it. So, this is the description of Tigor EV and its specifications. This is the most affordable EV in the country along with being the zippiest and safest because it has been lauded by GNCAP with a 4-star rating. I will say that the Tigor EV will be known as the cleanest sedan.

Q: Many manufacturers are bringing vehicles into the EV space and Tigor EV is your second vehicle in the space. Going forward, how the portfolio is looking like, if we look at your long-term portfolio in the EV space and what growth is anticipated for the electric vehicles’ domain, particularly?

A: Suppose, we were getting X bookings at the time when we launched Nexon EV in January 2020 has now gone up by more than seven to eight times. Generally, in a car launch, you will see that more bookings come when a car is launched, which gradually decreases but it is looking just opposite to it in this. It has two-three reasons for it:

(i) The experience of the 6,000-7,000 early adopters of Nexon EV was quite good and they have shared their experience on social media which has increased people confidence due to which more and more people are ready to buy EV.

(ii) Government incentives are the second big reason. You have seen that the central government has extended FAME incentives. Interestingly, few state governments like Gujarat and Maharashtra have provided top-up incentives on it, which is a big factor because it is making EVs more affordable.

(iii) Fuel prices, which has increased by Rs 15-20 per litre in the last one year, has had a positive impact on EVs.

If I will have a look at Nexon EV then its bookings are almost equal to Nexon diesel. This gives me confidence that the demand for electric vehicles will continue to growth and Tigor EV will also be benefitted from it.

Q: There is a global issue related to the semiconductor's shortage. How big is this issue for Tata Motors and how you are resolving it? How long do you think the problem will sustain?

A: We have adopted three to four wats to deal with the issue of semiconductor crisis and they are

(i) Close coordination just not with the Tier-I suppliers but also with those Tier-II semiconductor suppliers.

(ii) We have also bought semiconductors from the open market at a higher cost.

(iii) We also tried to reduce the usage of semiconductors in our parts and test it earlier to create an option and we did it.

So, to a large extent, we had mitigated that risk. This is an extraordinary situation created in Malaysia and I feel there will be an easing out on its impact in the next two to three weeks. So, I feel that its impact will be in place for the next five to six weeks if the wave stops at this level. Beyond that, it is uncertain to talk anything about the semiconductor industry and any talk related to it will be speculative.

Q: Demand is good at present, and people are willing to buy products. If there is a scarcity of products in the market, then how big the concern will be for your company?

A: As far as demand is concerned, after the end of the second wave of COVID, we have seen that it is improving progressively. If I have a look at the situation in Kerala, where COVID cases are still high. There was the festival of Onam in August and we have seen that the demand in the state despite these difficulties has been quite strong, yes, it is not strong like FY19, but it has been strong. So, I am hopeful that the demand will remain strong during the festive season. As far as supply is concerned, we are facing difficulties on the front like the rest of the industry, and it is a global issue that we are facing in the semiconductor industry. And to deal with it, we have created several options and we haven’t allowed our growth to stop due to the shortage of semiconductors but in August we saw that Malaysia was impacted by COVID, which led to lockdowns. Its impact will be felt in September, and it may go up to October. So, the supply side is a bit uncertain due to the ongoing problem in Malaysia and we are accessing the situation to know what impact it will have.

Q: Update us about the product launch portfolio for this year of Tata Motors? How the PV portfolio is looking like and what are the segments in which more launches are expected this year?

A: Currently, we have six products, which are quite successful in the SUV and car segment. We have seen that the SUV segment is growing at a good speed. We have also announced Tata Punch, which will be a sub-compact SUV in the mass market, and we expect that it will lead to an increase in our sales and strengthening the market position. In addition, in electric, you are seeing that we are moving ahead in the space at a great speed and are launching new models. We have also announced that in the next five years we will bring 10 models, which will be available at different price points, range points and will be available in different body styles. Going ahead, we will also enter into the CNG vehicle space. So, many plans are there, and we are also bringing quite exciting products on current products as you would have seen that we have already brought #Dark or Energy on Tiago. So, there are a lot of actions from our side, and it will be an exciting time for our customers from our side.

Stock market wrap: From Nifty at all-time high, FIIs, DIIs action to most buzzing sectors, what drove market this week — All you need to know

Amazon Diwali Sale 2021: Get up to 70% discount, extra Rs 300 cash back on fashion and beauty brands - Check details here