Just two interested parties have turned up and have submitted their KYC details as required for the initial steps of the auction process. 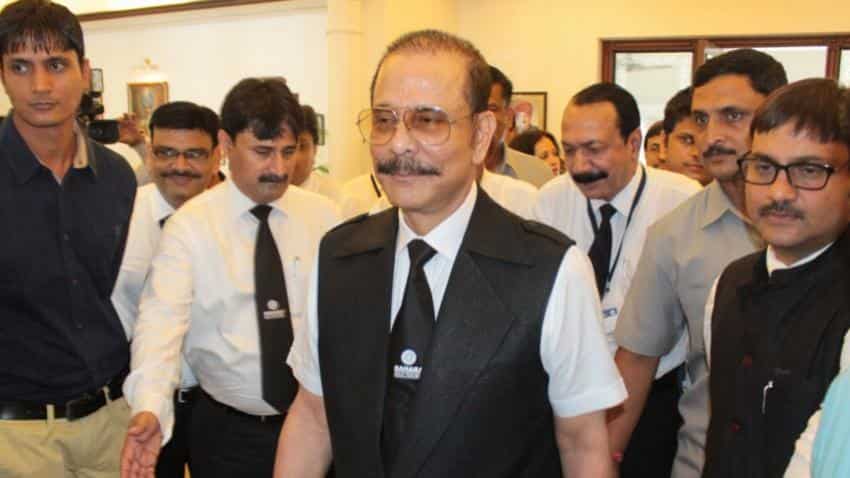 Sahara chief Subrata Roy during his visit to Bhopal on June 18, 2016. Photo: IANS

Only two potential bidders are believed to have shown initial interest for embattled Sahara group's super luxurious Aamby Valley resort town, which has been put up for a Supreme Court ordered auction by the official liquidator at a reserve price of Rs 37,392 crore.

While there is no official word as yet on the identity of the potential bidders as the entire exercise is being carried out under strict observation of the apex court and the observers appointed by it, officials privy to the information said just two interested parties have turned up and have submitted their KYC details as required for the initial steps of the auction process.

They refused to be identified and also declined to disclose the names of the potential bidders as the process has just got underway and involves strict confidentiality requirements, but said the two parties appear to be representatives of two separate consortium of investors and corporates.

Multiple real estate consultants also argued that it would be almost impossible for any single real estate player in India to buy such a huge property, a hill resort town in Maharashtra where a number of high profile celebrities are said to have invested, as the sector is going through a severe cash crunch and it is difficult for them to even arrange loans from banks.

The only possible buyers could be from China or Japan, quipped one top consultant, but added that there indeed a couple of cash rich industrialists in India who can afford such a price tag but have been so far away from real estate as a business.

The property, described by the liquidator as an "ultra- exclusive chartered city" that includes timber chalets, modern villas, golf course, hospital, school and airport, among other amenities.

The auction process has been initiated even as a Mauritius-based investor, Royale Partners Investment Fund, has signed a pact with Sahara offering to invest $1.67 billion (over Rs 10,700 crore) in the Aamby Valley project.

Sahara, which pegs the project's market valuation at over Rs 1 lakh crore, had earlier said the liquidator has initiated only first two steps of the auction by issuing advertisement for interested bidders and verifying their KYC (Know Your Clients) and the sale would be withdrawn if Rs 1,500 crore is deposited before the next date of hearing in the Supreme Court.

Sahara has been engaged in a long-running battle with the capital market regulator Sebi (Securities and Exchange Board of India).

The Supreme Court on September 11, however, refused to stay Aamby Valley auction, even as the group said Royale Partners Investment Fund has agreed to provide a loan of $1.6 billion (over Rs 10,000 crore) against security of 26% shares of its Aamby Valley project.

The Supreme Court directed the official liquidator to go ahead with the scheduled auction of Aamby Valley property in Maharashtra, as it rejected Sahara Group Chief Subrata Roy's plea for some more time.

The directions came after Roy said he had deposited Rs 533.20 crore in the Sebi-Sahara account and wanted to pay the remaining Rs 966.80 crore through cheques dated November 11.

The court had on July 25 asked the embattled Sahara chief to deposit Rs 1,500 crore in the Sebi-Sahara account by September 7 and said it may only then deliberate upon his plea seeking 18 months more for making the full repayment of the outstanding amount to be refunded to the investors.

There are several steps before the final auction will take place in Mumbai.

As per the approved schedule, the prospective bidders were to submit their KYC documents by September 9, during which two sets of papers are believed to have been filed.

The qualified intending bidders can access property related information and undertake physical inspection of the assets to be auctioned till September 20.

Thereafter, bids would be submitted in sealed cover with 15 per cent earnest money deposit with the official liquidator till October 3.

The auction has been scheduled for October 10-11, while the top three highest bidders would be initiated by email by October 17.

The successful bidder would need to deposit 50 per cent of the bid amount by November 17 and further 25 per cent by December 16 and then the final 25 per cent by January 16.

If the successful bidder fails to make the payment, the property would be offered to the next highest bidder with a similar payment structure spread over three months.

The properties on auction include an integrated hill city township spread over 6,761.642 acres in the great Sahyadri mountain range, 1,409.865 acres of land surrounding Aamby Valley City Development and land measuring 321.656 acres within the Satara district.

The liquidator said the properties are being sold under two distinct phases over a period of two days, as an alternate to each other, "given the quantum of the properties to be sold".

It also said the properties being auctioned will be sold /leased along with all subsisting licences, consents, permissions, registrations, approvals, grants and pending applications (as applicable) as per the Supreme Court order of July 25, 2017.